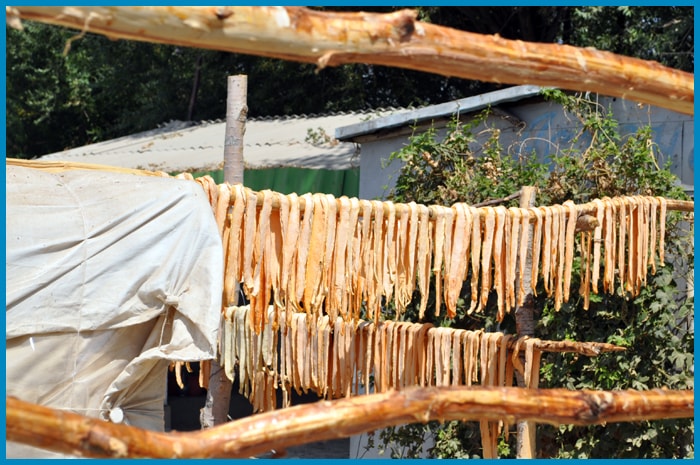 Day 1: Nur-Sultan
Guide will meet and accompany you to the capital of Kazakhstan for Kazakh melody Tour 8. In course of the tour you will visit the Constitution Square, Museum of the First President, the largest and unique shopping center Khan Shatyr. After it you will reach the top of the Astana-Baiterek monument and admire the magnificent panorama of Nur Sulatan. After it you will cross Ishym river to visit the Kazakh Eli Square. Later on you will visit the Palace of Peace and Reconciliation and the Khazret Sultan mosque that will amaze you by its beauty. The last sight for today's Kazakh melody Tour 8 is excursion in the National Museum of History of Kazakhstan. This sight will allow you to learn the further plans of developing and historical background of the capital of Kazakhstan. Night is in the hotel.

Day 2: Nur-Sultan - Ethno village - Nur-Sultan
During your travel you will notice that Kazakhstan is a country of great variety of cultures. By being one of the many points of the Great Silk Road this country has the features of Eastern and Western cultures. Here you will be able to witness a lot of rich cultural heritage. To have a better understanding of such interesting country you need to try their traditional food while learning the secrets of traditional culinary arts. In course of the tour you will have an opportunity to witness the way of making the pride of Kazakh people the musical instrument ‘sazsyrnay'. Don't forget about yurts that nomadic people used as a dwelling. The secrets of making this interesting house passed through generation. Moreover you will have a chance to personally experience the construction process. At the end of Kazakh melody Tour 8 you will try on the Kazakh national clothes as well as dancing the national dance "Kara zhorga". Then you will visit the EXPO museum (is not accessible on Mondays) as well as the witness the magnificent triumphal arch "Mangilik El". Night is in the hotel.

Day 3: Nur-Sultan - Almaty
The day will start with having a morning flight to the southern capital of Kazakhstan. Guide will show you the most interesting parts of the city that are going to tell you the history of this area. The first place for visiting is the popular place even among local people the Green Bazaar. Here you will have an opportunity to learn the art of bargain. After it you will be transferred to one of the oldest parks in Almaty that is known as the Panfilov park and the Zenkov Cathedral and the Memorial of Glory and Eternal Flame that are located there.  Later on you will be transferred to the other prominent sights of tours in Almaty that is known as the Medeo Gorge. Here you will be able to witness one of the most interesting sights of the travel as the highest mountain skating rink in the world and the dam. Then is the Kok-Tobe hill where you will be able to witness the tallest TV as well as the picturesque winding road is located. In Kok-Tobe Park you will be able to enjoy the magnificent view of the city from the special observation. The travel will end with riding the famous Almaty cableway. Overnight is in the hotel.

Day 4: Almaty - Saty - Kolsai Lake - Saty
In course of the tour you will be transferred to Kolsai lakes that are famous for the cascade of three lakes. During the your you will witness that the largest one is the most easiest to reach while to others you need to hike. Upon arrival you will be able to enjoy the pristine nature of the area. While being far away from civilization you will be able to see the abundance of mushrooms. During the travel you will know that the highest lake is also smallest one among them. Here you will be able to see the fir-wood and the alpine meadows with the rich flora and fauna. Vertical drop between the three lakes is about 700 meters. To reach the second lake from the biggest one you need to hike few kilometers. While travelling here you will enjoy the vacation where you can gather berries, mushrooms and fishing. This lake is known for its cleanness because it is a home for the rainbow trout - a fish that lives only in the running or spring water. In addition you will have a chance to witness the Marals, mountain goats, wolves and even bears. Transfer to Saty settlement, accommodation in the guest house/ homestay. Overnight.

Day 5: Kolsai - Charyn - Almaty
Today you will have a drive to one of the most picturesque sites of the country the Charyn Canyon.  This place is famous for being the natural complex that is unique not only in Kazakhstan but also in the world. This fascinating place appeared during the Paleogene and resembles the Grand Canyon of Colorado River in North America, although inferior to it in size. You will be impressed by the height of this canyon that reaches 150-300 meters. While witnesses the chaotic network you will be strike by "Valley of Castles" that was made by wind and water. The length of the valley is more than 2 km, width - 20-80 meters. The nature and time made this magnificent site slowly and carefully due to it you can see strange towers and columns. Overnight is in the hotel.